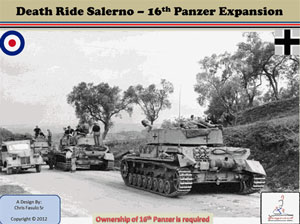 This game is the third installment in the Deth Ride Salerno series. It is an expansion game and you must own Death Ride Salerno - 16th Panzer to play this game. It is also an expansion from the perspective that the remaining elements of the 16th Panzer Division are in this part of the battlefield. This game introduces the British to the beachhead and the 56th UK Infantry Division lands and has the mission to take Battipaglia. It doesn't work out quite the way the planners hoped it wouldand the British sector would remain fairly stagnant for the duration of the battle, after initially gaining the town and then being thrown out.

There are some nice additions in this game including a Naval Gunfire Support chart to help orgnize the naval gunfire ships and introduce some supply issues for them.