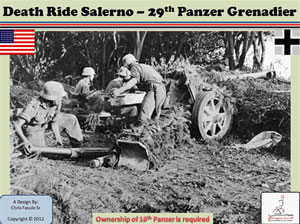 This is the next game in the Death Ride Salerno series and builds on the first game, Death Ride Salerno - 16th Panzer. The map is extended to the east and covers the area where the 36th US Infantry Division had to force its way into the hills surrounding the bridgehead. The Germans are on the defensive and must hold on and wait for the bulk of the 29th Panzer Grenadier and 26th Panzer Divisions to arrive and allow for the strong counter-attack that almost drove the Allies into the sea. To counter this threat was a large and active Naval Gunfire effort and the 82nd Airborne Division needed to drop in and help out.