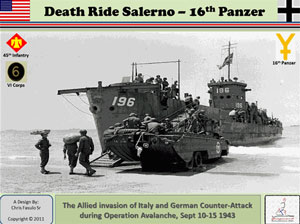 The US VI Corps has established itself ashore along the Italian coast and must begin to advance toward the hill towns of Eboli and Persano. In doing so the US 45th Infantry Division, with the mission to take the towns, pushes north on 10 September 1943 only to find a well prepared German defense in its way. The Americans are reinforced by the 191st Tank Battalion and the 2 Tank Destroyer Battalions. The 179th Infantry Regiment begins coming ashore on the 10th, the 157th on the 11th and the 180th on the 15th. To support the American force the allies have a major ship bombardment force to help. 5 destroyers and 3 light cruisers provided valuable fire support and were likely the element that turned the tide of the German counter-attack back and defeated it. There was even a parachute drop by the 504th Parachute Infantry Regiment to help and this is a new Death Ride feature.

The Germans fell back from the 10th to the 13th and then, when they had a sufficient force built up, make a concerted attack on the beachhead and gave the Americans a real scare. The game provides the means to examine the ebb and flow of this battle, with both sides defending and attacking at different points, giving both sides some fun and some tense moments.

(6) Scenarios that Start at the Beginning of Each Day, or;

a Campaign Scenario that Encompasses the Whole Battle