Folio Series 7: Battle of the Atlantic 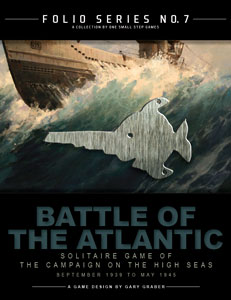 With the British and French entrance into World War II on September 3, 1939, the German Kriegsmarine moved to implement strategies similar to those used in World War I. Unable to challenge the Royal Navy in regard to capital ships, the Kriegsmarine began a campaign against Allied shipping with the goal of cutting off Britain from the supplies needed to wage war. Overseen by Grand Admiral Erich Raeder, German naval forces sought to employ a mix of surface raiders and U-boats.

Recommended Age: 12 and over