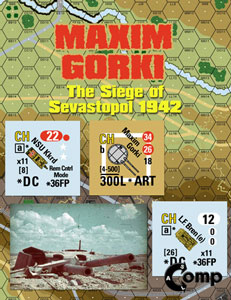 Outside of SEVASTOPOL RUSSIA, June 7, 1942: After a week of sustained bombardment by some of the heaviest artillery available in the world and repeated air strikes from the Luftwaffe the remaining 12" guns of Maxim Gorki were still firing defiantly at the 132nd infantry division advancing down the Belbek valley to take positions in the hills near maxim gorki to launch the assault on the battered fort. The German forces attacked in to the fortified position held by the first Battalion and were able to obliterate this unit. But a counter attack by additional forces of the 95th Rifle Division supported by fire from Maxim Gorki was able to beat back the Germans and inflict heavy casualties. A deadly crossfire from the fortress defenders and from an active flak battery located on the north side of the Belbek valley cut the Germans down in the open valley. The first full infantry assault on the Maxim Gorki fortress got off to a bad start and the now decimated 132nd Infantry Division was ordered to clear the flank while fresh troops from the reinforced 213th Infantry Regiment was brought up to continue the attack on Maxim Gorki.

Prolific designer Mark 'Tank' Porterfield brought you the fruits of his massive military library and penchant for research with Panther Line + Berlin 1 and Berlin 2 (not to mention the Monster Berlin versions), all set on World War II's Eastern Front. Before that, almost 20 years ago Tank brought you Pointe du Hoc, with a healthy on-site assist from Steve and Rob Pleva, plus map work (and on site research too) by Phil Nobo. The TANK is back and this time he is modeling another uniiqe Festung, the Sevastopol bastion of Stalin's Soviet Union and this is a MONSTER MODULE to do his work justice.

Some of the interesting details you'll receive: Russian Naval Infantry (new MMC/SMC counters); German demolition AFVs including Kettenkrad and Bren Carrier Demo vehilces; massive Naval Gun Turrets; Concreete Trenches; German Engineer MMC/SMC counters; Fortress rules; and so much more. Plus a large map with healthy-sized hexes, more terrain variants, all using official ASLese nomenclature for the SSRs while avoiding 5 point type and eye-watering verbiage bloat in what will be the largest Engineer-operation ever gamed at this scale.

>> A LARGE HEX map of the unique battlefield with the 'Hill 621' retro terrain art YOU LOVE!

>> Color die-cut counters -- ALL the combat counters you need to play!