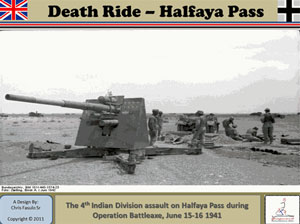 Halfaya Pass is another small GSI offering. The game focuses on tactical level combat and maneuver during Operation Battleaxe prior to the Crusader operation that lifted the siege of Tobruk. This is a stand alone game and does not need any other GSI title to be played. It is slightly larger than Hafid Ridge in terms of the number of units and can be played in a relatively short time.

The rules are modeled around the seven battlefield operating systems which make them easily understood and easy to learn.

This battle will provide a challenge to both players. The British will find that they need to be very aggressive to push through the anti-tank defense. The Germans have to simply hang on. Either way it's a cliff hanger. The British Matilda's are the queen of the battlefield, until they meet the 88's. Obstacle play is important and significant.

Game play is excellent for solitaire play and moves along very quickly. The game is specifically designed to play in a day.

The Commonwealth forces were made up of 3 infantry battalions and a squadron and a half of Matilda tanks, heavy but undergunned and underpowered.

All these games focus on company and platoon combat and combined arms use. The time scale is either 1 or 2 hours per turn and each hex is 330 meters, depending on the game.

There are enhancements to certain models that provide more detail and yet are still simple to learn and play. The rules are usually short, uncomplicated, and provide lots of detail and fun. They are focused on Maintenance, Logistics, Air operations, and in some cases (Salerno) Amphibious. The Amphibious model will be from troop ships to shore.