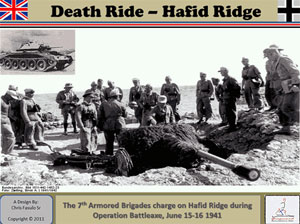 A small introductory game set in the desert in 1941 where a British tank charge against a well defended hill, Hafid Ridge, came to a bloody and quick end. Take a look at Marco Arnaudos' video review.

Hafid Ridge is a standalone game that is small, plays fast (a few hours), and focuses on tactical level combat and maneuver during Operation Battleaxe prior to the Crusader operation that lifted the seige of Tobruk.

The rules are modeled around the Seven Battlefield Operating Systems which helps make them easier to understand.

This battle will provide a challenge to both players. The British will find that they need to be very aggressive to push through the anti-tank defense. The Germans have to simply hang on. Either way it's a cliff hanger. Obstacle play is important and significant.

Game play is excellent for solitaire play and moves along very quickly. The game is specifically designed to play in an evening or afternoon.

The Commonwealth forces drove straight into the anti-tank screen. They were suckered into advancing into the anti-tank and anti-aircraft guns of the Germans behind the ridge and took heavy losses. By the time they were making some headway the 5th Panzer Regiment was on the scene and forced the British 7th Armored Brigade to break contact and run back to the Egyptian border.