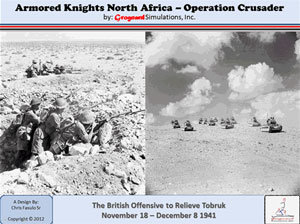 Operation Crusader as you've never experienced it, at Battalion and company level. This game is an extensively improved version of Armored Knights - Operation Gazelle. There are now variable die roll modifiers in addition to variable strengths. The game allows for the kind of fluid movement and battle flow that happened during the real battle. There are extensive command and supply rules that will give you the ability to have the same kinds of events happen to your force that happened to 21st Panzer. They were sent on a wild goose chase and then ran out of fuel and could not respond to additional Commonwealth efforts. There is a heavy reliance on using Combined Arms to enhance your chances of success in each engagement. You will even see the ability to use Ground Attack to hit enemy units with air by themselves. The rules are written using the Seven Battlefield Operating Systems and help to make it easier to learn. These rules are not overbrearing and can be easily digested. They are broken out by Command and Control, Maneuver, Fire Support, Intelligence, Air Defense, Mobility and Survivability, and Combat Service Support. You will need to consider all aspects of the battle and there will be consequences for not considering those aspects. Don't leave a HQ without an air defense unit nearby for protection.

This battle focuses on the Commonwealth releif of Tobruk. 4 Allied Divisions make a daring plunge into the Axis front and reach Sidi Rezegh only to be hammered because they didn't consolidate the gains or coordinate the breakout attempt well enough. The Afrika Korps has different plans. There is even a scenario that has the Germans make their attack on Tobruk first to see if they can take the port before the Allied offensive can disrupt it.

Many Examples and Play Aides