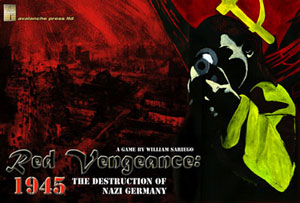 Red Vengeance is a sequel to Defiant Russia. Like that game, it is designed to be easy to learn and fun. The map portrays the western Soviet Union, Poland, Hungary, Romania and eastern Germany, with parts of Yugoslavia and Bulgaria as well.

Players control the actual units that fought in this campaign. Axis units mostly represent army corps. These include German, Hungarian, Bulgarian and Romanian units; the latter two will eventually switch sides. The Axis player actually starts the game with more tank units, the real striking power in this game, than the Soviets. But as they’re lost they are difficult to replace, while Soviet power just keeps surging.

Like Defiant Russia, Red Vengeance isn't a very large game. The 17x22-inch map fits easily on a small table. There are 140 playing pieces, and it comes in a small box that's easy to store. The game plays very quickly, concluding in about 90 minutes, with a minimum of charts and tables to consult.