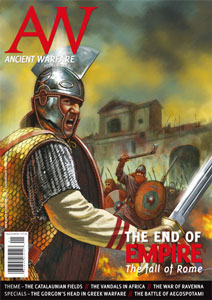 On 4 September AD 476, the Western Roman Empire came to an end. No great battle was fought, no great foreign invasion force marched upon the capital, nor was there an iconic enemy in the shape of a second Hannibal who annihilated Rome’s armies and broke down the emperor’s gates. Odoacer of the Germanic Sciri tribe and military commander in Rome’s employ, simply marched into the city of Ravenna after being proclaimed king by his troops, and dethroned the last Roman Emperor in the West.

From a half-Vandal common soldier, Flavius Stilicho grew to be the most powerful man in the Roman Empire. How was this possible and which were the most important moments in his military career? We will try to give an answer to these questions by reconstructing Stilicho’s life using the Historia Nova written by Zosimus, one of the best historical sources we have on the last and turbulent decades of the Empire, during which the highest point of Germanic advancement in the service of Rome was reached.

Theme: Konstantin Nossov, "The Eternal City’s most grandiose structure - The walls of Rome"

Rome is famous for its monumental Colosseum and Saint Peter’s Dome. Few people, however, have heard of the greatest building project ever realized in the city of Rome – the Aurelian Wall. The structure, which consumed immense labour resources, is the best preserved urban fortification of the Roman Empire.

Contrary to earlier periods of Roman military history, it’s not always possible to reconstruct every piece of equipment for a late infantryman from the Tetrarchy or Dominate (roughly AD 275–400). Although some pieces are indeed based on single finds or even contemporary artistic evidence, only a few can boast a wealth of sources. Notwithstanding this fact, a satisfactory image of the late Roman infantryman can be pieced together from all the sources available to us.

Theme: Corrado Re, "Battle of the Catalaunian Plains, AD 451 - Scourge of God"

The confrontation between the Romans and the Huns in AD 451 left its mark on the psyche of the Roman people. The Greek philosopher Damascius, who was born a few years after the battle, wrote: “No one survived except only the leaders on either side and a few followers: but the ghosts of those who fell continued the struggle for three whole days and nights as violently as if they had been alive; the clash of their arms was clearly audible.”

Britannia was part of the Roman dominion for approximately three hundred and sixty-seven years. Yet when Roman control of the island ceased, it was not lost as the result of any hard fought struggle, but rather abandoned to its fate.

A late Roman helmet from ContraquinumTheme: Marc G. DeSantis, "The Vandals in Africa - The Vandal Menace"

The historian Procopius wrote of the terrible injuries that Gaiseric, King of the Vandals, inflicted upon the Romans in the dark days of the fifth century AD : “Every year, in the beginning of spring, he made invasions into Sicily and Italy, enslaving some of the cities, razing others to the ground, and plundering everything; and when the land had become destitute of men and money, he invaded the domain of the Emperor of the East. (…) And one day when he had embarked on his ship in the harbour of Carthage, and the sails were already being spread, the pilot asked him, they say, against what men in the world he bade them go. And he in reply said: ‘Plainly against those with whom God is angry.’ Thus without any cause he kept making invasions wherever chance might lead him.”

August 489. The Venetian Plain spread out toward the western horizon as the Ostrogoth columns descended the Julian Alps. The trek moved slowly toward the Isonzo River, the de facto demarcation line for Italy. Ostrogoth king Theodoric was leading his entire nation – an estimated 200,000 men, women and children, driving their cattle and 20,000 oxcarts – toward its very own promised land. Only one thing spoiled the image: a fortified camp barring their way.

In the ancient world a soldier’s appearance was a crucial morale factor, which could boost confidence or cause despair. Armour, therefore, had to protect a soldier and look visually appealing, so that most were in some way decorated. One of the most popular decorative motifs found on ancient armours was the Gorgon’s head or Gorgoneion, which combined both the need for protection with a visually striking image.

The debate: Duncan B. Campbell, "What really happened at Aegospotami? - Cunning vs. incompetence"

In 405 BC, the final battle of the Peloponnesian War took place in the Hellespont, far from both Athens and Sparta. The Spartan fleet inflicted a crushing defeat on their Athenian counterparts, who were abandoned – in Macaulay’s memorable phrase – “to feed the vultures of Aegospotami”. This disaster spelled not only the end of the war for Athens, but also the end of her maritime supremacy. Yet, for such an important battle, scholars are still divided over the precise course of events. So, can we ever say for sure what really happened at Aegospotami?

During a 2009 lecture, Adrian Goldsworthy remarked that gladiators are one aspect of ancient Rome everyone knows about. “Hollywood has this strange obsession, with virtually every epic or drama set in the Roman period there will be a gladiator or two, hanging about somewhere.” Indeed, Hollywood has fed us such a steady stream of Roman gladiator movies that it is now impossible to conceive of one without the other.