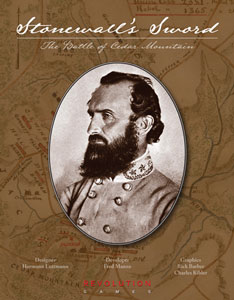 On the stifling hot morning of August 9th, 1862, Maj. Gen. Thomas “Stonewall” Jackson’s corps of Confederate veterans encountered a lone Union division under the shadow of Slaughter’s Mountain (also known as Cedar Mountain). The isolated Union division belonged to Maj. Gen. Nathaniel Banks, Jackson’s rival during the Valley Campaign and an opponent who the great Stonewall had consistently defeated. The Confederate troops were some of the best in the Rebel army, they outnumbered the Union force and were under the command of one of the iconic generals of American history. What could possibly go wrong?

Stonewall’s Sword: The Battle of Cedar Mountain is a medium-sized wargame (176 counters and a 17” x 22” map) that allows you to explore the reasons why things almost went horribly wrong for the Confederates that day. The map scale is 140 yards/hex and each unit counter represents an infantry regiment or artillery battery. The game system features the Blind Swords chit-pull mechanic, which thrusts players directly into the fog-of-war of an American Civil War battlefield. Players are never quite sure of when formations will activate – neither the enemy’s units nor their own! Event chits, each tailored to the conditions that existed at the battle, provide players with opportunities to create out-of-sequence attacks, rallies and a myriad of other actions. Players are thus constantly challenged with each chit-pull to produce a plan of action that will best exploit the current circumstances on the field. This unpredictable player interaction creates not only an exciting gaming environment but also accurately simulates the confusion, intensity and unusual circumstances of the Cedar Mountain battlefield.

The game system also features a simple Brigade Orders mechanic that forces players to assign activated brigades one of four orders – Attack, Defend, Maneuver or Regroup. The assigned order sets the parameters for the activated units and dictates how they can move, what type of combat (if any) they can perform and if they can rally. This establishes the “tone” for the units in the upcoming turn and reflects the effects of command orders without the need for complex rules or order writing.

In addition, certain “what-if” options have been included, allowing the Union player to possibly get Ricketts’ Division to arrive sooner than it did historically or the Confederate player to have Jackson snap out of his “stupor” earlier in the day. Both of these possibilities can be influenced by the players through the allocation of their Command Event chits.