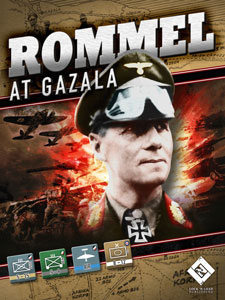 On 26 May, 1942, Erwin Rommel launched a strong right hook into the desert, flanking the minefields and fortifications painstakingly built by the British to protect Tobruk. Against heavy odds and in a tensely contested battle, Colonel General Erwin Rommel defeated the British and recaptured Tobruk, earning himself a Field Marshal’s baton in the process.

Rommel At Gazala is the 2nd Edition of Jim Werbaneth’s simulation of the daring offensive of Panzerarmee Afrika against the British Eighth Army’s fortified line near Gazala, Libya, in May and June 1941.

Rommel at Gazala is a quick-playing, accessible game. It is sufficiently easy for new players to enter into board wargaming, but with enough possibilities to offer significant replay value to newcomer and veteran player alike. Counter density is low, letting the players concentrate on strategy more than minutiae, and the pace is fast. There are also special rules to evoke the special flavor of the battle; armor superiority, the dreaded “88,” fortifications, and of course the special capabilities of Erwin Rommel himself.

and Some German Battalions