Accueil > Wargames > MMP > Beyond the Rhine 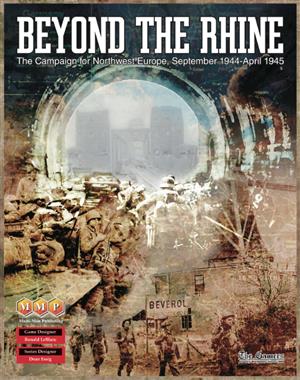 Beyond the Rhine depicts the campaign for Northwest Europe from September 1944 to April 1945. It begins with the German Army reeling from a string of near-fatal defeats, and in full retreat to the safety of the West Wall where it hopes to make a stand. The Allies, flush with victory, believe one more push will bring them home for Christmas.

The expected walk-over was not to be, and players will find either army a challenge to command. Allied material superiority is (mostly) balanced by German tenacity, rugged terrain, and lousy weather. Defensive-minded players will be happiest playing the Germans, but players of all temperaments will discover that there is still plenty of torque left in the Axis even at this late stage of the war. The Allies will not cross the Rhine without a tough fight!

Beyond the Rhine is a big game, with 3.5-mile hexes, 3.5-day turns, and counters for units from battalions up to divisions. At this scale the various Western Front battles—Market-Garden, Hürtgen, Bulge, Nordwind, Remagen, etc.—have an operational ebb and flow, but can also be viewed in relation to the whole front. A comprehensive game like this one, covering the entire Western Front, was long overdue.

Special rules in this 14th game of the Operational Combat Series have been carefully designed to recreate this fascinating campaign. They include:

The importance and difficulty of the Rhine crossings are distilled into rules allowing the bridges to be blown and repaired, and pontoons to be emplaced.

Background effects of Allied air interdiction are simple and elegant (built into the Terrain Effects Chart and Weather), but the player does have the option to switch some of these planes to normal barrages and sweeps.

The strategic significance of the Ruhr and the Saar, of clearing the left bank of the Rhine, and of major ports such as Antwerp are reflected by simple economic effects and the game’s “Broadfront” restrictions on US supply placement and usage.

The Wacht am Rhein counter-offensive is recreated by simple mechanics for off-map buildup and operational surprise.

Many options are included for players wanting even more realism. For instance, there are rules for German Kampfgruppen and extra restrictions on the plethora of Allied independent units.

Beyond the Rhine features three monster-sized campaigns that use a 44x66-inch map layout and over 1,000 combat units. Also included are several smaller scenarios, including a 9-turn Bulge game played on a special map (otherwise, portions of all four maps would be needed).

BTR rules and scenario booklet with 10 scenarios (including 2 one-map scenarios).