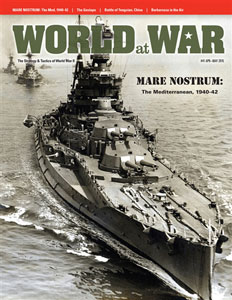 Mare Nostrum is an operational level wargame of the struggle for the Mediterranean and North African theaters of operation during World War II from the German intervention in early 1941 through the Allied liberation of Sicily in 1943. There are four main scenarios of varying length.

This was a combined naval-air-land campaign, in which all elements of military power were utilized. Grounds units are mostly divisions, air units represent six to twelve squadrons (depending on the quality of the aircraft and air force), and naval units represent one fleet aircraft carrier, two or three battleships, four to six cruisers, six-twelve destroyers, or various numbers of other ship types.

The map covers the entire Mediterranean littoral and Middle East, from Gibraltar in the west to Basra in the east. The live area of the map is divided into land and sea zones, with fortresses and certain islands treated as separate areas-within-areas. Turns represent one month of real time.

The game system is based on S&T's award winning Red Dragon Rising. Players conduct actions which encompass discrete combat, logistical, intelligence, and other operations. Some actions allow combined operations, others are restricted to just one type of unit. Each player generally conducts one action per turn, but various game functions will allow for additional actions, representing periods of rapid activity alternating with the slower process of buildup of forces. Events, some fixed, some random, and some chosen by the players, affect a player's capabilities and objectives.