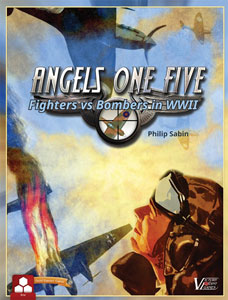 This is your finest hour!

This fascinating simulation puts players in charge of British and German Squadrons as they duke it out for air superiority over the battlefields of Europe. Unlike other air wargames, this one is not tactical (individual dog fights), nor strategic (conducting bombing campaigns); Angels One Five is uniquely operational in scale with combat conducted via squadron-size units.

Angels One Five comes with fourteen scenarios covering famous battles between the RAF and the Luftwaffe, as well as a scenario generator for infinite replayability. The game is easily played solitaire, or by multiple players each commanding one or more flights of escorts or interceptors.

• One scenario booklet with 14 scenarios