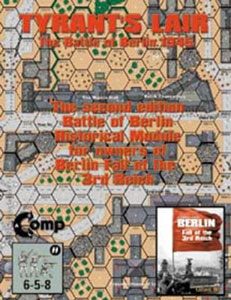 BERLIN, GERMANY, 25 April 1945: In the maze of ruined blocks both sides fought a close quarters war over each building. At the corner of Alt-Mark Strasse and Thorwaldsenstrasse a small group of desperate Germans converted a large building into an urban fortress. Soon the fortress would be put to the test as an assault detachment from the 220th Guards Rifle Regiment reached the intersection. Finding the building defended with artillery and machine guns 1st Lieutenant Vasili Chernyayev ordered the two 45mm antitank guns supporting his force to fire at the upper level windows to suppress the machine guns while his guardsmen stormed the building. Storm troops, leading the attack with hand grenades, broke into the main level of the house and killed a German crew manning a small artillery piece. Another detachment, with the help of direct mortar fire, captured a nearby building that was supporting the main position. As vicious hand-to-hand fighting broke out in the fortress the Germans launched several counter-attacks supported by tanks and self propelled guns. Intense fighting for this position raged on for the rest of the 25th before the Germans withdrew...

ASLComp BERLIN II—TYRANT'S LAIRTM is a detailed new ASLComp VARIANT that tells the story of the Battle of Berlin with incredible detail. The two linking maps connect to those from BERLIN FALL OF THE 3rd REICHTM to create an urban battlefield unlike any in tactical-level gaming history. What’s more, the battlefield includes the location of the Führerbunker, the ultimate victory condition in an ASLComp scenario.

In keeping with the CH approach, you will receive a stack of small, fast-playing scenarios to get you on the map right away. And what a map it is! Map artist Charlie Kibler emerged from the rubble and focused his talent for CH to create the new BERLIN II map. And we’re sure you’ll love the results.

ASLComp BERLIN II—TYRANT'S LAIRTM includes a new Special Rules booklet, and a pile of play aids to use with the monster scenario, presented in the same manner as used in ASLComp FIRST WAVE AT OMAHA. You'll also receive two sets of two different counter sheets, a total of 312 new color die cut counters.

BEGIN PLAY ALMOST IMMEDIATELY using the small, tournament-sized scenarios. Then move on to the medium sized battles, and build to the ultimate, monster that will be made available for owners of both BERLIN variants, that want to take their ASLing...all...the...way. What’s more, this product does not contain a combat-fatigue inducing mass of SSR verbiage, unlike some releases that are much more limited in scope. Instead it’s slam-bang action, on a massive scale and easy to dive right into.

We’re willing to guess you’ll be ready to fight for the Hitler-city of the Third Reich, block by bloody block until your personal leader counter is knocking on the door to the Führerbunker, ready to enter and end World War II at long last.