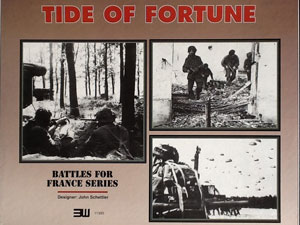 In early September 1944, the Allied armies were everywhere approaching Germany from the west. His eye on a rapid thrust across the Rhine, Montgomery failed to capitalize on the capture of Antwerp with its massive port intact. In Montgomery's mind, only a single thrust (by him), supported by airborne forces, could bring the war to a swift conclusion. Eisenhower, however, favored a "broad front" approach, with several armies closing up to the Rhine simultaneously. For the Allies this was one of the most critical moments of the entire war. Tide of Fortune enables you to explore for yourself the many tantalizing "what ifs."

The Battles For France series is the third manifestation of John Schettler's Westwar system. For this series, the system has been streamlined and refined, while some additional chrome has been added. The map has no fewer than 17 types of terrain, at a scale of three kilometers per hex. Turns represent one to two days of real time. Game features include: weather, fatigue, morale, command control, anti-tank fire, mine sweeping, shore batteries, ferries, leadership, demolition, reaction movement, combat assets, air support and more. The game includes several scenarios and variants that enable players to explore the critical alternatives available to the opposing commanders at the time.

One set of exclusive rules

Four sheets of charts and tables

Players: one or two