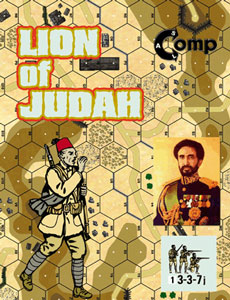 West-of the mareb river, ETHIOPIA, 3 OCTOBER 1935: On 28 March 1935, General Emilio De Bono was named as the Commander-in-Chief of all Italian armed forces in East Africa. In addition, he was the Commander-in-Chief of the forces invading from Eritrea, the "northern front". De Bono had under his direct command a force of nine divisions in three Army Corps: The Italian I Corps, the Italian II Corps, and the Eritrean Corps. At precisely 5:00 am on 3 October 1935, De Bono crossed the Mareb River and advanced into Ethiopia from Eritrea without a declaration of war. In response to the Italian invasion, Ethiopia declared war on Italy. At this point in the campaign, roadways represented a serious drawback for the Italians as they crossed into Ethiopia. On the Italian side, roads had been constructed right up to the border. On the Ethiopian side, these roads often transitioned into vaguely defined paths.

This is ASLComp Lion of Judah, a new take on the epic battle in Ethiopia, during 1935-36. The world was outraged .. but stood by idly as Italian fascists and their minions moved in their armor and aircraft to crush a small nation. Color rules, all new scenarios in color format, a sheet of counters ... all included.