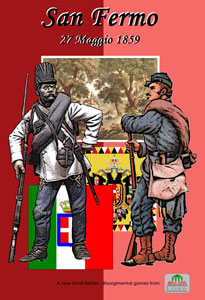 The first of the N-SB (Small Battles) series is also the first dedicated to the Italian Risorgimento. Players can play both the phases of the battle or the entire battle with optional rules for better Austrian training and troop control.

The battle freed Como menacing Milano and the Austrian Army main line of communication and supply. The different scenarios proposed in the game, offers you the morning battle, the evening one and the possibility to play them together destroying, as Garibaldi did, one after the other two austrian brigade or, in the Urban’s boots, decide if risk to lose the battle, losing San Fermo and Como, wile you wait until the reinforcements’ arrival or to launch your First Brigade in boldy countrattacks on one of the worst battlefield of the entire Northen Italy.

Based on activation chits and operative orders, the game system is centered on the totally different battleground of Italian theatre that forced both armies to fight battles "hand to mouth" sending in company after company. Counters represent single companies, cavalry squadrons and half batteries.