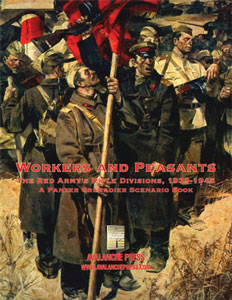 Taken by surprise on the morning of 22 June 1941, the Red Army of Workers and Peasants reeled under Nazi attacks. By the end of the Great Patriotic War, 5.1 million Soviet soldiers would have been killed in action, and another 1.1 million died of wounds suffered in combat.

Yet it was the Soviet soldier who raised the hammer and sickle over the ruins of the enemy capital. The Red Army remained in the field despite massive losses, refusing to admit defeat until Berlin lay at their feet and Adolf Hitler's murderous Thousand Year Reich had been destroyed.

Workers & Peasants is a 64-page book supplement for the Panzer Grenadier series based on the battles of 1941 and 1942, when the Soviet Union appeared on the verge of defeat. There are 20 scenarios, or separate game situations, most of them much larger than those found in our Eastern Front or Road to Berlin boxed games.

There are also the background articles you've come to expect from an Avalanche Press book, this time focused on the Red Army's troops, weapons and organization. It's the perfect companion piece to our most popular Panzer Grenadier game, the huge Eastern Front Deluxe Edition.

This is not a stand-alone game; ownership of any Eastern Front Deluxe Edition is required to play some of the scenarios and Road to Berlin, Sinister Forces, Elsenborn Ridge and Battle of the Bulge to play all of them.