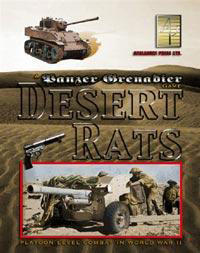 Desert Rats is the seventh complete game from the Panzer Grenadier Series and picks up where Afrika Korps left off. Most of the scenarios are between November 1941 and May 1942 in North Africa but there are also some bonus scenarios that cover East Africa/Somali.

Two 22" X 34" maps, 825 counters. Two players but can be played very well solitaire. With Initiative determination phase and the action segment alternating between players, there is no sitting around waiting for your turn.