Panzer Grenadier: Battle of the Bulge 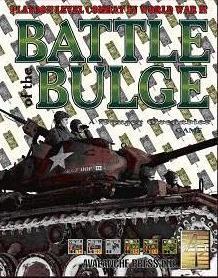 Battle of the Bulge is the fifth game in the Panzer Grenadier series, following Eastern Front, Heroes of the Soviet Union, Airborne and Afrika Korps. It focuses on the fighting in the southern sector of the battle zone, where German panzer and parachute divisions drove on the key crossroads of Bastogne. American infantry, armor and paratroopers initially gave way, but rallied, held, and drove the Germans back.

The game includes 51 scenarios, ranging in size from small ones playable in well under an hour to large tank battles. There are 465 game pieces, representing tank and infantry platoons, artillery batteries, and individual leaders. The game also includes four geomorphic game boards showing typical terrain from the Ardennes region where the battle took place. These boards were hard-mounted in the original printing of the game, but more recent printings include updated boards in the current, semi-rigid style.