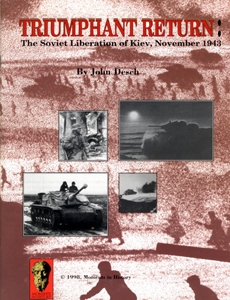 Their successful offensive during the early autumn of 1943 found the Soviets with several bridgeheads over the Dnepr River. The largest of these, located north of Kiev, erupted on 3 November as infantry and tank units of the 1st Ukrainian Front burst through the German line. Soon Soviet tank columns were racing to the distant towns of Fastov and Zhitomir, mauling several German panzers divisions hastily brought up to stem the Red tide. On 12 November, however, the Germans managed to assemble a powerful striking force centered around the 1st and 1st SS Panzer Divisions, threw them at the overextended formations of the Red Army, and rolled them back. Over the next four weeks the action see-sawed back and forth as reserves were committed and attack followed counterattack.

Triumphant Return is a two-player operational simulation of the battle for Kiev which took place during November and December 1943. One side represents the German forces of the 4th Panzer Army while the other side controls the Red Army forces of 1st Ukrainian Front. It uses the highly popular Ring of Fire /Eastwall game system.