Accueil > Wargames > Victory Point Games > For the Crown expansion #2: The World is Round

For the Crown expansion #2: The World is Round 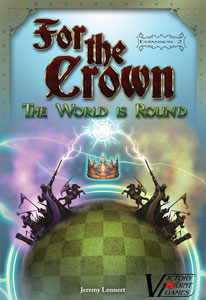 The world is growing.

New frontiers are being explored, and powerful discoveries being made. One can sense the excitement in the air; it is a time of new ideas and expanding horizons. Visionaries chart courses that recently would have been unthinkable. Even common folk are pulling up their stakes and setting out as brave explorers, hoping for a chance at fame and riches.

But bravery is not enough today; traditional methods no longer suffice for victory. The royal contenders are becoming more scholarly, hiring magisters where once they sought bureaucrats. Rumors hint at bandits being hired to pick apart their opponents' less-flexible traditional armies.

The world is growing. We must grow with it, or disappear in the shadows of greater men...

The second expansion to For the Crown, The World is Round introduces several new units with the ability to move in a cylindrical fashion – moving off the edge of the board and re-appearing on the other side. Rush your opponent with the vicious Raider, and command your troops with the Khan. Take charge of the battlefield and utilize maneuvers that will make your opponent's head spin with The World is Round.