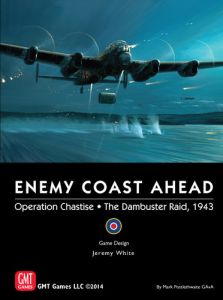 On the night of May 16, 1943, nineteen Lancaster bombers of 617 Squadron took off from their base near Lincoln in Great Britain and headed for the heart of German industry in the Ruhr. The squadron’s task was to destroy the dams that controlled the reservoirs feeding Germany’s war engine. In the words of aeronautical engineer Barnes Wallis, the mastermind behind the operation, “power is dependant on the supply of natural stores of energy such as coal, oil and water.... If their destruction or paralysis can be accomplished THEY OFFER A MEANS OF RENDERING THE ENEMY UTTERLY INCAPABLE OF CONTINUING TO PROSECUTE THE WAR.”

The Lancasters had been modified to carry a most unusual ordnance codenamed Upkeep. It looked more like a petrol barrel than an explosive device, but the painstakingly engineered and tested outer layer cushioned a volatile mine designed by Wallis to bounce over torpedo nets and kiss the lip of the dam, its backspin carefully devised to hug the dam rather than ricochet on impact. Upkeep was supposed to plunge down along the wall like a depth-charge, detonating halfway down. The concussion would crack the structure, and the water’s mass held back by the dam would push open the crack, creating a breach in the wall. The dam would be destroyed.

Eight of the Lancasters would not return that night, but the two primary targets of the Möhne and Eder dams were breached, letting loose a combined torrent that measured nearly half a million tons of water and taking the lives of over 1200 German civilians and military personnel. Measured in civilian casualties, it was the most lethal night of the bombing campaign thus far, although later missions would dwarf its casualty list. Measured in terms of industrial disruption, the raid cut the region’s electrical power for several hours and severely reduced its water reservoir. It was not a decisive blow, but it was successful nonetheless. Had at least one other dam been breached, it could have been devastating. This is your challenge: can you match 617’s success? Can you surpass it?

In Enemy Coast Ahead: The Dambuster Raid, you command a newly formed squadron assigned the task of breaching the dams in the Ruhr Valley. Not only are you presented with a variety of decisions, you play the invisible hand of fate as your crews endure the hazards of a dangerous night raid. Play the campaign and you get to organize and train the squadron, or play the historical scenarios.

Each Lancaster is represented by its own 1” counter. Each bomber will carry two or three 5/8” markers representing aircrew, ordnance and possibly an elite crewman. All the men awarded decorations before or during the raid are represented in this game by their own marker, each imparting a unique characteristic to its crew. Even the squadron commander’s dog gets his own marker!

Ground crew are also featured in the campaign game, represented by markers rated for a variety of tasks. You will have to requisition and manage your Erks effectively while maintaining security. That’s not so easy. You may find it necessary to transfer the local barmaid or take the drastic measure of transferring 54 squadron out of Scampton airbase, or even quarantining the base altogether.

Reconnaissance is crucial. In the campaign game you will need to survey the defenses of the dams and the routes to them, but too much recon and you risk tipping off the enemy. But how much is too much? You will have to target the right dams or the right combination of dams, to get the job done. Möhne and Eder are the juiciest targets, but what if they are well defended? Do you risk it, or go for the other dams hoping to breach enough of them to achieve your goal?

Training is vital. In the campaign game you will requisition and then train your crew to fly at exceptionally low altitude, maintain a steady speed, locate the target in the dead of night, and release ordnance at precisely the right distance from the lip of the dam. You will only have just so much time to prepare your squadron. You might have to decide what is more important: learning to maintain the right altitude and speed while preparing to release ordnance, or the ability to find the dam? If your men don’t master these skills quickly you may have to favor one over the other. You can always impose extra training, but push your men too hard and they become fatigued, perhaps even damaging their bomber in training or worse, crashing it. And if you don’t push them enough you may run out of time. The moon will be right only for so long and the reservoirs are slowly rising. Once full, the Germans will open the valves and release the water, making them that much harder to breach. The clock is ticking.

The game board is organized into three sections, the Mission Planning Blotter, the Flight Map (from Scampton to the Ruhr), and the Target Maps. The first scenarios use only the Target Maps, while larger scenarios will use them as well as the Flight Map. Only the campaign game takes full advantage of the Planning Mission Blotter, allowing you to organize and train your squadron, assign tasks to ground crew, and modify the Lancasters for this unique raid. The Lancasters were modified in a number of ways for Operation Chastise:

top-turret and armor were removed to compensate for the weight of the bouncing bomb (yes, those bombers were sitting ducks for Nightfighters).

VHF radio sets were installed to allow better command and control while over the target (they were standard in fighters but this was the first time a bomber’s cockpit was fitted with them).

Dann bombsight. pair of Aldis spotlights rigged to judge the bomber’s altitude over the reservoir.

The Target Maps are intended to portray (and analyze) four key elements in a bomber’s attack: altitude, speed, distance from the dam, and the angle of approach to the face of the dam’s wall. During an attack you will strive for the perfect angle, the ideal speed and altitude, adjusting one or more of these before releasing Upkeep at just the right distance from the dam (“Upkeep” was the codename for the bouncing bomb). You may choose to pull-up rather than release ordnance, circling around for another run, because finding that sweet spot is tricky and each Lancaster has only one bomb to drop. You’ve got to make it count.

The full campaign game begins with the forming of the squadron weeks before the raid. The player assumes the role of squadron leader or one of his subordinates in team play, requisitioning bombers, ground crew, and aircrew. He must train the aircrews and results are variable. Veterans tend to get more out of training than less experienced crews, but there is always the possibility of damaging and even crashing bombers, and losing or exhausting crews in training. As Air Vice Marshal Cochrane explained to 617’s Wing Commander: “Now there’s a lot of urgency in this, because you haven’t got long to train. Training will be the important thing, so get going right away.”

Meanwhile, the player may order recon missions along the flight path and over the dams, garnering information that will help him devise a target list. There are 7 dams that can be attacked, but it is unlikely the player will have the resources to hit them all (there’s nothing stopping him from trying). Before launching the attack the player would like to know which dams are defended by flak, searchlights and balloons, and how high the reservoir is (the higher the better, but too high and the Germans may soon open the valves and reduce the water-level, so timing is crucial). Too much recon can tip off the Germans, however, which means that the fog of war is a very important aspect of the design. The player won't know if security has been compromised until the flight is already underway. As Wing Commander Gibson explained to the men of 617 squadron: “When the other boys ask you what you’re doing, just tell them to mind their own business, because of all things in this game, security is the greatest factor.”

All this planning and preparation ends when the player decides his squadron is ready and he launches the raid. The player then organizes his squadron into waves, assigning aircrew to Lancasters, arming them with ordnance, and assigning primary and secondary targets, and wave leaders. Once launched, bombers are likely to encounter hazards along the flight path -- flak and searchlights of course, but also utility poles and trees. Historically, 617 squadron flew low enough to hit sea waves and electrical cables (the player may choose to fly high, but that risks encountering nightfighters, an even more lethal threat). Along the route bombers might experience engine trouble or lose their way. Navigation training pays off during the flight turns (each turn represents one hour of historical time).

Upon reaching and acquiring the target, the player uses target maps to play attack turns, each representing approximately 8 minutes of historical time. Here each bomber has to negotiate the dam's immediate terrain and defenses (if any -- recon missions might have revealed that some dams are undefended, making them prime targets, but if security has been compromised the player may discover that the Germans have added defenses). There is an approach sequence where the player must resolve the attack of each bomber on the target map, striving for the perfect speed and altitude, hopefully releasing the bouncing mine at precisely the right distance from the dam. There is the possibility of being jumped by nightfighters if the attack is prolonged, motivating the player to get the job done promptly.

And finally, the player resolves the fate of returning bombers as well as those that lost their way, and then conducts a morning-after recon mission verifying the damage he inflicted on the dams. A dam that was only damaged may have weakened and breached by morning, or conversely, the reports of your exuberant bomber crews may prove to have been exaggerated.

The game is also presented in nine scenarios, each isolating a particular aspect of Operation Chastise. In fact, the rules are organized in program-fashion, the first section explains the attack rules. The first few scenarios can thus be played after just reading those rules. The first scenario, for example, treats the action over the Möhne reservoir, while subsequent scenarios incorporate more of the mission (and more rules) until the player is ready to undertake the campaign game encompassing the entire operation from training to bombing and return.