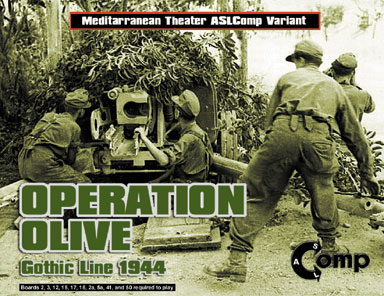 Using more than 15,000 slave-labourers, the Germans created more than 2,000 well-fortified machine gun nests, casemates, bunkers, observation posts, and artillery-fighting positions to repel any attempt to breach the Gothic Line. Initially this line was breached during Operation Olive (also sometimes known as the Battle of Rimini), but Kesselring's forces were consistently able to retire in good order. This continued the case up to March 1945, with the Gothic Line being breached but with no decisive breakthrough; this would not take place until April 1945 during the final Allied offensive of Italian Campaign.

Operation Olive has been described as the biggest battle of materials ever fought in Italy. Over 1,200,000 men participated in the battle. The battle took the form of a pincer manoeuvre, carried out by the British 8th Army and U.S. 5th Army against the German 10th Army (10. Armee) and German 14th Army (14. Armee). Rimini, a city which had been hit previously by air raids, had 1,470,000 rounds fired against it by allied land forces.

According to Lieutenant-General Sir Oliver Leese, commander of the 8th Army:

“ The battle of Rimini was one of the hardest battles of Eighth Army. The fighting was comparable to El Alamein, Mareth and the Gustav Line (Monte-Cassino).”

ASLer and historian … and San Marino citizen Gian Carlo Ceccolli has crafted a tasty bit of MTO history for you in GL44-OpOlive. The set combines a set of 16 historical scenarios set on geo boards from your standard collection-plus 3 historical maps provided in the set using the new lay-flat, hard boards. You also get a set of historical notes to bring the battle home to your gaming table. Giancarlo poured his heart and soul into this effort-and researched it as only someone with on-site capabilities could. We kept the look classic and G.C. really shows a touch for straightforward, playable scenarios. You will NOT be buried in piece density. You WILL be buried in esoteric history! Includes a sheet of overlays, 3 maps, special rules, and a full scenario set.