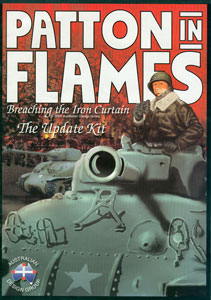 Based on World in Flames, our international award winning game of World War II, Patton in Flames is a complete game that provides everything you need to fight the greatest battle never fought (at least not yet!).

The game includes a political system that allows all major powers to try to influence the minor countries to come on their side.

The counters include heavy weapons units for both sides as well as all the new aircraft and naval units such as the Mig-15 and Mig-17, the F-84 Thunderjet and F-86 Sabre, the Canberra and IL-28 bombers, Soviet Communist and Nationalist Chinese carriers and much more.

Can you save the world? With Patton in Flames you can find out.

Patton in Flames includes 5 maps, 1000 counters, Rules and charts and is available now!