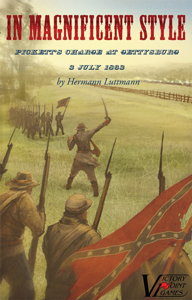 n Magnificent Style, from designer Hermann Luttmann, is a solitaire game depicting the final desperate Confederate attack on 3 July 1863 at the Battle of Gettysburg, popularly known as Pickett’s Charge. As General Longstreet, you must decide how quickly to press your troops across this deadly open ground before allowing the men to regroup for another bound. But time is not on your side, and the longer your stalwart soldiers remain in this maelstrom of enemy fire, the more dangerous it becomes, and the less likely they will arrive with the verve and numbers required to carry the day.

With only five turns in which to reach your objective and attack, how far can you push your luck? Your options are simple: Death or Glory!