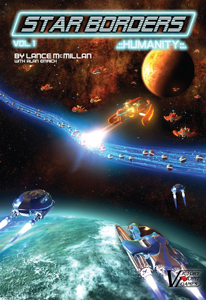 In Star Borders: Humanity 2nd edition, two factions, the Grand Imperium and the Free Alliance, are fighting to establish control of a contested (if not particularly important) "backwater" region of the galaxy. Each player represents the commander of one faction’s forces. Unfortunately, each player’s position as a Governor / Viceroy / Satrap is tenuous in relation to their larger civilization, which is why you were assigned here - to the armpit of space and with scant resources - instead of to your glorious core world controlling the newest and best forces.

In the grand scheme of things, you seek to build a good reputation and make the best of your near-exile to the Star Borders, so that you can leave by advancing your career and family name.

Star Borders is played on connected maps arranged to represent a contested region of space. Players vie for dominance in the regions created by controlling planets, nebulas, and asteroid fields. One player controls the movement and combat of the Alliance (blue) spaceforce, while the other controls the movement and combat of the Imperium (red) spaceforce. Each player, in turn, moves and then engages in combat with his units, in an attempt to capture (or prevent from being captured) key locations (e.g., planets) on the map. Finally, resources called Logistics Points (LPs) are gathered.