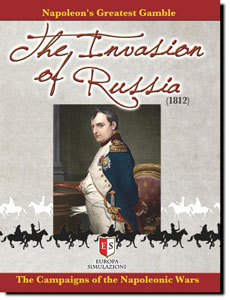 On 14th December 1812, a few thousand men, half-starved, frozen and riddled with disease staggered out of Imperial Russia and reached the relative safety of the West.

These were the remnants of Napoleon’s once magnificent Grande Armee of more than 500,000 men, the largest force ever assembled in Europe (possibly even in the World) at that time, which on 24 June had crossed the River Nieman and marched into the heart of Russia. So began what, by any standards, was one of the most catastrophic, dramatic, heroic, and significant in terms of both its short- and long-term consequences, military campaigns in history.?

It was also Napoleon’s greatest gamble. A single throw of the dice on which he staked everything. And lost.

Now we give you an opportunity to see if you can succeed where the most famous general in history failed, and change the course of history.

At the heart of TIR are innovative and simple mechanics intended to encapsulate key elements of campaign warfare during the Napoleonic period; sweeping manoeuvres, feints and deceptions, forced marches, the greater flexibility and cohesion of seasoned troops, and the crucial importance of logistics.

TIR is very much a wargame, with an emphasis is upon the challenges of leading and co-ordinating armies during the Napoleonic period. Victory will generally go to the player who is best able to formulate and implement a cogent strategy aimed at attaining well defined objectives, whilst allowing a margin of error for enemy action and ill-fortune.

Subject to how TIR is received by gamers, the intention is for this game to the the first in a new series of Europa Simulazioni publications under the title "The Campaigns of the Napoleonic Wars". All of the major campaigns will be included using the same basic Rules and scale; and, the maps will fit together to cover all those areas of western Europe in which the armies of Napoleon were deployed.

A set of 36 Random Event Cards (for the Advanced Game)