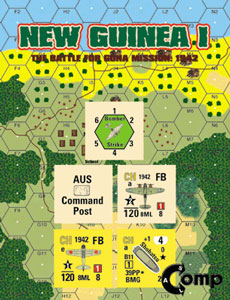 NEW GUINEA, 9 December 1942: The Australians began their assault on Gona village on November 18. It was Gona from which the Japanese invaders had launched their disastrous campaign aimed at Port Moseby. After their setback in the south, the Japanese were pushed back across the mountainous terrain until their backs were against the sea at Gona. Twenty-one days after launching their offensive, the Australian soldiers of the 7th Division managed to compress their foes into a tight defensive perimeter centered around the village. While the cost had been high for the attackers, the Japanese had been whittled down to some 100 effectives, most of whom belied such a status in the enemy camp due to suffering from starvation and a variety of tropical diseases. The enemy resolve remained intact as the weary men of the Australian 21st Brigade and 39th Battalion pressed on into a hand-to-hand fight for the bomb devastated village. By 1330 hours the last Japanese soldiers had been dispatched. Lieutenant Colonel Honner of the 39th was able to report to Southwest Pacific HQ, “Gona’s Gone”.

One of the oldest historical modules ever published here is now back. NEW GUINEA I: Gona Mission uses all new, and beings the NEW GUINEA 'battle of the beachheads' set that will take you to Buna, Gona, and beyond. New map with all new art, check! New scenario editions? Check! Landing scenario, yes. Color, die cut counters, color scenarios, new art. All yes. The Aussies are back in the jungle, beating back the invaders ... and you get 2 counters sheets, all the combat counters you need.