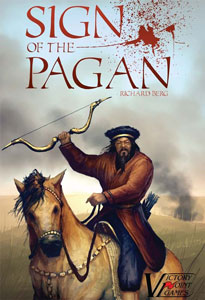 Sign of the Pagan from Richard Berg portrays the most famous battle of one of history’s most feared figures – Attila the Hun. It is considered by some to be the battle that saved Western Europe from the Huns and, for the most part, put an end to Attila’s wide-sweeping drives for loot.

The Battle of the Catalaunian Fields was fought as the age of the Roman West faded away and the Dark Ages began. As Attila’s Huns and their Germanic barbarian allies moved into Western Europe, leaving a trail of pillage and destruction behind and threats of more violence to come, the remnants of the Western Roman Empire joined with their former enemies, the mighty Visigoth tribe, to stop the deadly invasion.

The two coalitions squared off in battle in the summer of 451 A.D. in what is now central France. The result entered both history and mythic folklore, as one of the last armies of the Roman Empire stood in common cause with their bitter Gothic rivals to defend their lands and their peoples from the marauding terror of the Huns.