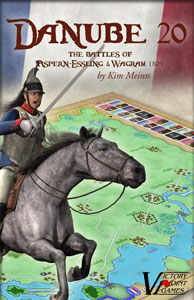 When the capture of Vienna failed to bring the Austrians to the bargaining table, Napoleon sought more direct means of ending the War of the Fifth Coalition. His first attempt was a nearly impromptu effort to force a crossing of the Danube, then in full spring flood, with the handful of forces that were immediately available. Almost predictably, the resulting battle of Aspern-Essling resulted in a crushing French defeat. Stung by the setback, Napoleon then spent the next month and a half preparing for another assault at the same site, this time concentrating all available troops to ensure his success.

In the ensuing battle of Wagram, the second largest engagement of the Napoleonic era, Napoleon managed to defeat the Austrians but failed to achieve the decisive result he'd hoped for, forcing him to acknowledge that his foes were "no longer the enemy of old."

Danube 20, from designer Kim Meints, features both the battles of Aspern-Essling and Wagram, allowing players to examine this pair of critical battles fought just across the Danube from Vienna. Featuring low unit density (20 pieces or less) and modest complexity, the game focuses on dramatic, fast-playing turns and creating a strong historical narrative. The use of "story-driven" random event cards and the tracking of army morale provide for operational pauses and the "friction of war" to give players a great feel for the parry-and-thrust of a Napoleonic grand battle as the armies close to bayonet-point to see which will break first!