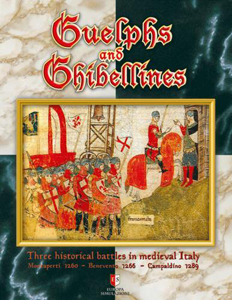 Guelphs and Ghibellines simulates the traditional clashes between 13th century armies with an original system which is both simple and accurate, allowing to reproduce typical tactics of the battle of the era, and focusing on progressive combat fatigue and loss of cohesion of formations on the battlefield.

Cavalry remains the Queen of the battlefield, but the Italian communal infantry (the best in its period) manages to have a sound impact on the outcome of the fight.

Montaperti 1260: The Arbia colored in red

Benevento 1266: The twilight of the Hohenstaufen

Campaldino 1289: The Saturday of St. Barnaba

All the main protagonists of the battles and all the different types of troops are considered, included cavalry with various level of armour protection, infantry, archers, crossbowmen, palvesari, the Comunal Carroccio, etc.