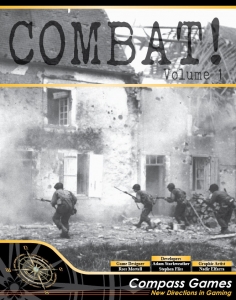 Combat! is a solitaire game on man to man combat in the 20th century. The player will control friendly forces and attempt to complete a scenario against enemy forces that are controlled by the game system. At the start of each turn the player will play 1 card from their hand to the Initiative track. This card will determine the initiative values for each of the player’s friendly teams and may have other effects depending on the card. After this the player will assign orders to each character on his side. This will determine the actions that the character can take this turn. Once the friendly characters have orders assigned to them, the player will draw an Enemy AI Card for each Alerted Enemy Character. These cards will determine the Initiative value for each Enemy Team and the Order that they will receive. The Order determines the actions that an Enemy Character will take that turn.

The game turn is then played through in 4 Impulses. From the lowest initiative value to the highest each Character (Friendly and Enemy) will perform the action specified on their Order counter. All Characters will act on Impulse 1 before moving to Impulse 2, then Impulse 3 and finally Impulse 4. At the end of the turn all Orders are removed and the played cards returned to the respective decks.

Each soldier (friendly and enemy) is represented by a 1” counter with 5/8” informational markers showing morale, wounds, orders etc. With individual names (for friendly and enemy characters) each game tells a varied and memorable story.

“I can't say enough how much I'm enjoying this game! It is filled with tactical decisions and oozes narrative.”

With multiple scenarios ranging from attacks on Farmhouses, to defending a hill, to destroying enemy artillery pieces, to rescuing members of the resistance, to desperate last stands as the enemy close in for the kill, Combat! provides a wide variety of battle situations for you to experience. Add in the fact that there are random events, variable enemy forces and many scenario options and you have a game that can be played for years to come.

As another play tester wrote:

“This scenario, "Attack the Farmhouse”, pits your 12-man US squad against an unknown number of German defenders controlled by a very ingenious Card-Order Counter AI system. It felt like I was watching a battle from Band of Brothers or the old Combat TV Series as the game unfolded before me.”

Solitaire Suitability: 10 out of 10 – Designed specifically for solitaire play

Time Scale: Abstracted dependent upon actions taken per round but between 30 seconds and 2 minutes