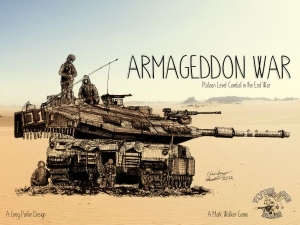 Following disease, famine, and economic collapse among the world's first-line powers, conventional war erupts in the Mid-East for what arable land remains. Old allies join the carnage, and the war grows, pitting age-old adversaries and their new friends against each other. Armageddon War depicts the chaos in the midst of this war.

Armageddon War is a platoon level game set in the near future. The first module focuses on the Mid-East, pitting Israelis, Russians, and Americans against age-old adversaries. We hope you feel that the game is a breath of fresh air in the war gaming world. There are no turns, just continuous activations. The intensity of a unit's close combat modifier is determined not only by its weapons but also by the tactics you choose to use for the assault or defense, and when you fire on a unit, it has the option of taking cover, or returning fire. The number of dice and the color of dice rolled, determine the number of hits.

For example, a Merkava platoon has a gold firepower number over a red explosion. Hence, when it fires on a target with a defense factor over a gold shield (usually other tank platoons) every success inflicts one hit on the target. But if the same platoon fires on a unit with a defense factor over a red shield (usually infantry), it takes two successes to inflict a hit.

Formations are activated by chit draw (nothing new there), but returned to the draw cup not at the end of a turn, but rather in a continuous manner. When chosen, a formation marker is placed on the activation track, to the right of the last-drawn formation. When only one chit remains in the cup, the two leftmost chits are returned to the draw cup. Simple, continuous. Available for pre-order soon.