A World at War 3rd reprint 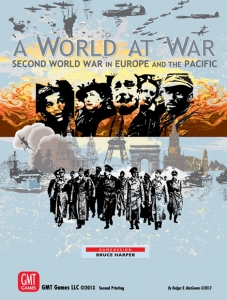 A World at War, a wargaming masterpiece, brings together in one game all of the decisive elements of the Second World War. With roots tracing back to Avalon Hill's classic Rise and Decline of the Third Reich, and to its eventual successors--Advanced Third Reich and Empire of the Rising Sun--A World at War takes this popular gaming system even further, clearing up ambiguities and adding more detail to what was already a superb family of wargames.

Developed through a decade of design and playtesting, A World at War has it all: armor and infantry slogging it out against marines and paratroopers; battleships and cruisers dueling with lethal carriers and stealthy submarines; army planes and carrier planes crisscrossing the skies with bombers and interceptors and ultra-fast jets. But unlike in some games, in A World at War you get to decide which units you'll build the most of, and where you'll ultimately deploy them--in Europe or in the Pacific, on the eastern front or in the Med. Yet as you decide, remember that armaments don't constitute the only battlefield: war is also waged within foreign governments through diplomacy, and within your own skunk works through research. So grab every advantage you can get, every advantage--not just in sortie range and torpedo detonators, but also in drabber things like oil and boots: oil from those rich fields to the south, and boots for tromping through those deep snows to the north. Even the puny partisan will play a part, for unwatched he can wreak havoc behind your lines. So stay flexible and keep a sure eye on your enemy. And if suddenly you find yourself outwitted and outgunned, don't be afraid to surge-research the atomic bomb or perhaps take the exigency--less risky and less glitzy--of fortifying your beachfronts and erecting flak near your factories. React quickly though, and learn from your mistakes--like how you cracked too few encryptions, or gobbled up too many island groups, or shipped too little matériel via Murmansk. For this is A World a War, a game of complex choices and intertwined strategies. Plan fast, fight hard, and go knock those rivals to their knees!

A World at War, a game that has it all. Warfare not only on land and under the sea and in the air--but also on trucks and in treasuries, on the lab bench and in the diplomatic pouch. Master every sphere, triumph over every setback, and you'll earn that rare chance to conquer armies and rule nations . . . even if they're only cardboard.