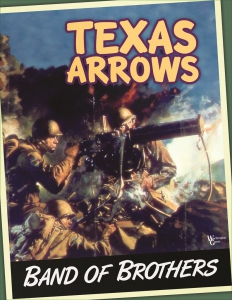 Band of Brothers: Texas Arrows is the third game in the Band of Brothers series of WW2 tactical games. It follows the US 36th Infantry Division through Italy, France, and Germany during WW2. First line and elite US Infantry squads are introduced. In twelve scenarios, they face a mixture of opposition forces including second line Germans, first line Germans, and Panzergrenadiers. New vehicles make an appearance as well.

The initial print run will also include 2 sheets of counters that will update Screaming Eagles counters to the updated proficiency system introduced in Ghost Panzer.

Texas Arrows is NOT a standalone game but needs Screaming Eagles and/or Ghost Panzer to play.