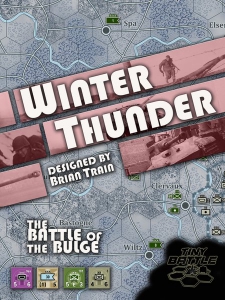 In late 1944, in the wake of the allied forces' successful D-Day invasion, it seemed as if WWII was all but over. On December 16, with the onset of winter, the German army launched a surprise counteroffensive through the densely forested Ardennes that was intended to cut through the Allied forces in a manner that would, the Germans hoped, turn the tide of the war in their favor. You can call it Unternehmen Wacht am Rhein ("Operation Watch on the Rhine"), Bataille des Ardennes ("Battle of the Ardennes"), or the Ardennes Counteroffensive, but it is best known today as the "Battle of the Bulge".

WINTER THUNDER is an operational-level game on this famous battle. Designer Brian Train has substantially revised and streamlined his 2004 design, Autumn Mist, incorporating a newly-researched and more accurate order of battle with revised counter values and reinforcement schedule. The rules have been cleaned up and include an improved solitaire play system. There's even a drastically revised map with a different scale and treatment of terrain.

WINTER THUNDER utilizes the same "nearly diceless" double-blind mission matrix system from AUTUMN MIST, SUMMER LIGHTNING, and THE BALKAN GAMBIT. This unique system sets the game apart from the rest of the pack.

The game includes a campaign game scenario that runs from December 16 to January 3, a bit longer than many Bulge games, but playing in a fraction of the usual time—just around 3 hours. There is also a short “Home for Christmas” scenario which assumes the Germans launch an offensive with more localized aims and fewer resources.

1 rulebook to rifle through.

A non-military issue Ziploc bag to billet your troops.

You’ll need to requisition a ten-sided die from your divisional quartermaster.