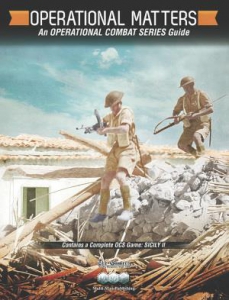 NOTE: the OCS Series Rulebook and Charts are not included; these can be downloaded from the MMP support website if you do not already have these. Operational Matters: An OCS Guide is a support booklet devoted to the Operational Combat Series. Editor Mark Milke has selected a nice mixture of game-specific strategy articles on many of the games in this series, and also some generalized analysis of the system’s nuances. Novice players will especially enjoy the blow-by-blow examination of the Primosole Bridge scenario from the game that is included in the magazine, Sicily II.

Sicily II is a full-sized game covering the amphibious invasion of that island in the summer of 1943. This new edition is quite different from Dean Essig's original game from back in 2000. It features a revised order of battle, modified rules, and a new map. The most obvious change is in scale: hexes are now 3.5 miles across and there are two turns per week (the original had 2.5-mile hexes and four turns per week). This makes for a smaller, faster game that conforms to the scale chosen for Beyond the Rhine and the upcoming games set in Western Europe. We think Sicily II is a perfect way to give new recruits their baptism in the fire of OCS, and is also a worthy entry in the series for players who have already earned their stripes.

Here are some of the game’s highlights:

There are six scenarios in all (three using the entire map, and three using just a portion).

The Allied airborne fiasco is recreated with simple scatter rules.

The amphibious landings can be played out using standard OCS naval rules, or players can mostly skip these and begin with the bulk of Allied forces already ashore.