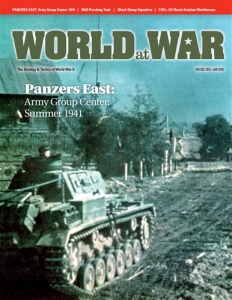 Panzers East Solitaire (PES) is a simulation that covers the advance of Germany’s Army Group Center, starting on the first day of Operation Barbarossa and potentially extending to the last day of August later that same summer. The design supports both strict historical and alternative history explorations. That is, at the end of July, when the AGC offensive was historically shut down in favor of supporting extended drives by the flanking army groups, it’s possible that, if you’ve done better up to then than your historical counterpart, Hitler may authorize a continued and immediate advance on Moscow. You command the German forces while the system directs the handling of Soviet forces. You win or lose based on the timely seizure of key areas on the map.

Each game turn equals one-third of a month. Each hexagon represents 16 miles (24 km) from side to opposite side.