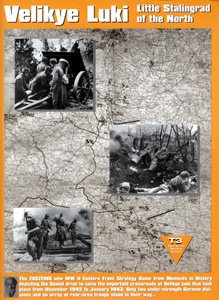 The town of Velikye Luki was captured by German forces during July 1941. From the view of Heeresgruppe Mitte which was responsible for this sector, Velikye Luki was very important for three reasons-(1) It formed a bridgehead across the Lowat River; (2) it was a major railroad junction; (3) It screened the vital Vitebsk-Leningrad railroad. The Red Army launched several attacks and partisan actions against Velikye Luki during the following 15 months, but failed almost completely. By November 1942, Velikye Luki and the surrounding area was still in German hands.

The twin operations Mars and Uranus formed the centerpiece of the Soviet strategic efforts in the fall of 1942. Launched in tandem with Operation Uranus, the successful counteroffensive around Stalingrad, Operation Mars targeted the Rzhev salient in order to dislodge the Wehrmacht from its position west of Moscow in November 1942. Both attacks were accompanied by another push against the city of Velikye Luki. This offensive had the task of cutting off the vital Vitebsk-Leningrad railroad as well as drawing away Axis reserves from the intense battles at Stalingrad and in the Rzhev salient.