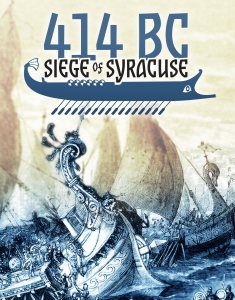 The Great Sieges game series highlights command decisions for players against a solitaire game engine opponent. They have been designed for easy set up and quick game play. Game unit placement is shown on the game board and units are wooden markers representing troop and ship formations.

Each game was developed for solitaire play. In 414BC Siege of Syracuse and 1759 Siege of Quebec there is also a two player version of the game. Both sides require you to make great decisions based on good strategy, keep your wits about you when orders do not turn out well, and press on to victory.

All three games use a common set of rules for game play but each game has it own set of unique rules related to specifics of those individual sieges.

Play Solitaire as Athenians and 2 player version too!

Unique to 414 Siege of Syracuse:

As the Athenian side you win the game in two ways:

As the Syracusan side, victory is achieved by:

Highlights of 414 BC Siege of Syracuse:

The Athenian player must keep up attacks and deal with Syracusan reinforcements that come into play. They must also construct siege walls to choke off the city and fend off counter attacks by the city army. As Syracuse builds counter walls the Athenian must destroy them if he expects to encircle the city.

The Syracusan side is playing for time. It must defend the city against attacks by land and sea. Its forces must sally out of the city to drive the morale of the Athenian side down. Further, as the progress of siege walls is advanced by the Athenian side, Syracuse has the ability to build counter walls to slow down the progress.