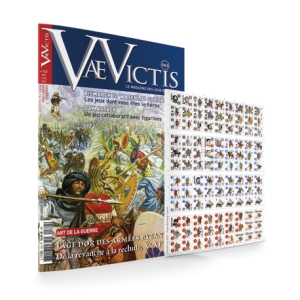 Basileus II is the sixth module in the A la Charge!

It includes the special features of Basileus including Elusive, and particularly formidable units, the Byzantine cataphracts.  Five battles are proposed:

Sayf al-Dawla cuts Cappadocia into pieces. Facing him, Leo Phocas refuses the fight and leaves the emir of Aleppo to his plundering, waiting for a convenient moment to trap him. The opportunity arises when he returns to Aleppo. Leon managed to surprise the Hamdanid army in a defile and to defeat it, despite a significant numerical inferiority. The battle of Andrassos ended in a complete disaster for the Muslim army.

The fords of the Orontes 994

Manjutakin, a Turkish general in the service of the Fatimids and governor of Damascus, launched an offensive on the city of Apamea and began a siege. Michel Bourtsès, Byzantine duke of Antioch, came to the aid of the city with his troops. The meeting between the two armies takes place on September 15 near Apamea. The battle sees the clear victory of the Fatimids.

The new and inexperienced Byzantine emperor Roman III Argyre undertook an ambitious campaign to retake Aleppo. Overconfident, the emperor and his generals end up in a delicate position in terms of supplies, after being defeated in several skirmishes. On August 10, 1030, the Byzantines began their retreat to Antioch and were trapped en route by the army of Mirdassides. The battle of Azaz turns badly for Romain III who escapes from the capture.

On August 26, the Byzantines confronted the army of Alp Arslan near Manzikert, in the extreme east of the empire, north of Lake Van. The two armies are of comparable size. The Seljuks initially dodged the attacks of the Byzantines to harass them then by offensive returns on their flanks. This tactic of false retreats, characteristic of the horse archers of the steppes, had already been fatal to the Romans of Crassus vis-a-vis the Parthians. It produces in Manzikert the same devastating results. After having engaged the retreat, Romain IV sees his army disintegrating in front of the skilful Seljuk riders.

The Byzantines, led by the Caesar Jean Doukas, confronted a company of Norman mercenaries led by Roussel de Bailleul, who had become autonomous in Anatolia. The Byzantine army weakened by the defection of Nicephorus Botaniates was defeated.