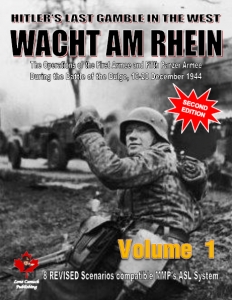 Ownership of MMP's Beyond Valor™ and Yanks™ are required.

WaR 1 - Marnach, Luxembourg, 16 December 1944: The 2.Panzerdivision and its new commander, Oberst Meinrad von Lauchert, had no real responsibilities during the first phase of Unternehmen Herbstnebel (Operation Autumn Mist). However, its first priority was to capture the bridge over the Clerf River at Clervaux, before advancing on Bastogne…

WaR 2 - BERDORF, LUXEMBOURG, 16 December 1944: In the early morning hours, the 212.Volksgrenadierdivision made a successful and relatively uneventful crossing of the Sauer River, managing to overrun the American outposts along the river line before they could get out any warning. Under orders to rapidly close with their objectives of the American command post in Consdorf and artillery positions in Scheidgen…

WaR 3 - HOSINGEN, LUXEMBOURG, 17 December 1944: The 26.Volksgrenadierdivision’s orders were to establish bridgeheads across the Clerf River by nightfall of the 16th; so any enemy resistance had to be either subdued quickly or bypassed. As it turned out, what impeded the 77.Volksgrenadierregiment’s advance was Company K, 3rd Battalion, 110th Infantry Regiment and Company B, 103d Engineer Battalion in Hosingen, who commanded the crossroads on top of “Skyline Drive”…

WaR 4 - Longsdorf-Tandel Road, Luxembourg 17 December 1944: Screened by the mist, which aided all of assault companies of the 352.Volksgrenadierdivision; the leading two battalions by chance struck at the junction between the 109th Regiment’s battalions, whose 2d Battalion’s Company E was in Führen and the 3d Battalion’s Company I deployed in front of Bettendorf…

WaR 5 - Fringerhof, Luxembourg, 17 December 1944: Alerted by the German 7.Armee’s preliminary artillery barrage, Lieutenant-Colonel James Rudder, commanding officer of the 109th Infantry Regiment moved Company G up on the right of Company F, replacing it in Brandenburg by Company C from the regiment’s reserve 1st Battalion, which was stationed in Diekirch…

WaR 6 - HOSCHEID, LUXEMBOURG, 17 December 1944: Before dawn on 16 December the engineers of the 5.Fallschirmpioneriebataillon began ferrying the assault companies of 14.Fallschirmregiment across the Our River. Their instructions were to head as rapidly as possible west to the Clerf River, establish a bridging site near Kautenbach, and then press on west to Wiltz to establish a blocking line behind the Sûre River, south of Bastogne

WaR 7 - Diekirch Luxembourg, 19 December 1944: By early evening 916.Volksgrenadierregiment had command of the heights in the Our/Sûre triangle and 914.Volksgrenadierregiment, taking up its place in the centre of the division’s line, could begin to make more headway. The US 109th Regiment, with Lieutenant-Colonel Rudder’s command post back in Ettelbruck, was now formed in an arc in front of Diekirch. However it was a sadly depleted regiment.

WaR 8 - BOIS DE HERBAIMONT, BELGIUM, 20 December 1944: While Panzer Lehr Division was still struggling toward the Clerf River on 18 December, 2.Panzerdivision was rolling west across the river through Clervaux. In the vanguard, was the reinforced Aufklärungsabteilung commanded by Hauptmann von Böhm. Taking the road which skirts to the north of Donnange and Lullange, the Kampfgruppe ran into the first of the Bastogne roadblocks at the Antoniushof farm road junction – a task force from CCR/9th Armored Division