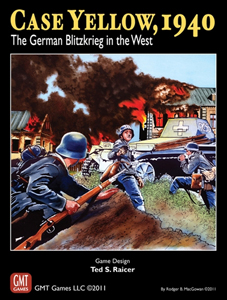 September 1st, 1939: Germany invades Poland, setting off the Second World War. Except for minor attacks, France and Great Britain, the victors of World War One, do nothing. The Allies view the short Polish campaign of 1939 as a case of a newer, larger army winning out over an older, smaller army. Certainly the massed panzers are impressive, and need to be emulated, but the winter months see little positive activity on the Allied side. Missing the more vital lessons of the Polish campaign, the Allies are content to wait. Not only do their armies outnumber the Germans in terms of manpower, tanks and artillery, they have the advantage of operating on the defensive. Meanwhile the Germans feverishly apply the lessons they learned in Poland, and hone their operational techniques. The surprise German conquest of Norway jolts the Allies out of their lethargy. They do not have long to wait for the next blow.

May 10th, 1940: Germany unleashes its Blitzkrieg upon the western Allies. Six weeks later, the war ends in a smashing German victory. Four Allied national armies have vanished. The tiny Dutch and Belgian armies, pulverized in battle, have surrendered. Great Britain rescues most of the soldiers in the BEF, but their heavy weapons and vehicles remain on the beaches of Dunkirk. The island nation begins to re-arm, but for now is out of the fight. The proud French Army, with many regiments tracing an unbroken lineage back to the 1600s, suffers the most catastrophic defeat of modern times before France surrenders.

How did this happen? The Germans, realizing they could not win a repeat of World War One, set about reinventing the offense. Their formula included massed tank formations, an air force dedicated to close tactical support, and most importantly, a command and control system based on the use of radios. Allied tanks and soldiers were often equal or superior to their German counterparts – when given the opportunity to properly deploy and prepare. Unfortunately, such opportunities were few and far between. The Germans had securely positioned themselves inside an Allied decision making process that often took days to execute, rapidly concentrating, overwhelming defenders and then exploiting success. Certainly there were answers to every German innovation, but in six short weeks the Allies did not have the time to find them.

Case Yellow is a simple, but accurate, simulation recreating this monumental campaign. Each game turn is divided into eight action segments. Each player has four action chits. The initiative player selects the first action chit to play. The remaining seven chits are placed in an opaque cup and drawn randomly. In most cases the Germans have the initiative and go first by playing one of their four action chits. Each German chit is marked for movement or combat, and the German player chooses what his army will do (though the German player during the course of a turn must use two chits for movement and two chits for combat). At the end of movement, any panzer or motorized formation adjacent to Allied units has the option to attack. If combat is chosen, all German units adjacent to Allied units may attack if allowed by terrain.

Two Allied chits are marked two for movement and two for combat – not both. The creaky Allied command structure will bedevil the Allied player throughout the game. Need to move? Sorry – you just drew a combat chit. Set up to attack? You drew a move chit, and only the number of motorized formations equaling the roll of a six-sided die can attack.

Motorized units play by different rules, though the Germans with their better-trained, veteran formations do it much better than the Allies. Simply stated, any motorized unit with a Troop Quality (TQ) higher than any adjacent unit may disregard those adjacent units’ zones of control for purposes of movement, combat and retreat. Only a solid line is proof against motorized unit exploitation and envelopment, and only so long as combat does not create gaps. Additionally, motorized units only may attack a defender hex from two hexes without engaging any other adjacent defender units – the speed of motorized concentration allows the attack to go in before a traditional defensive response can be established.

The Luftwaffe is present in overwhelming strength, allowing the German player to negate the toughest defensive positions if necessary. Each Luftwaffe asset marker provides a one column shift on the combat table. Each Allied air asset marker provides the same shift, but there are far fewer Allied markers – not that the Allies had far fewer planes (they had almost as many), but the Allied air-ground coordination was so cumbersome that planes usually did not arrive in time to influence the battles being fought.