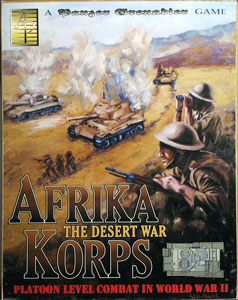 After shipping troops and supplies to the Italian colony of Libya, the army there finally invaded British-held Egypt in September 1940. A series of campaigns followed as first one side and then the other gained the upper hand.

Afrika Korps covers the battles from the first segment of this campaign, in the Panzer Grenadier game system. The fifty scenarios range from the initial Italian raids of June 1940 to the Allied “Operation Brevity” of May 1941. Actions range from small but intense infantry fights to wide, sweeping tank battles. Afrika Korps is a complete standalone game, not requiring any other products for full enjoyment. All the troops and tanks of the British, Australian, Italian and German armies that fought in Libya and Egypt are included.

Afrika Korps has the largest playing surface in the series, with three 22x34 maps printed on heavy paper. Of the 50 scenarios, 40 of them only require one map, and only 2 require all 3.

Note that this game has garnered quite a lot of criticism for the depiction of some of the Italian standard infantry counters unarmed with their hands in the air (surrendering), which none of the Allied counters have.