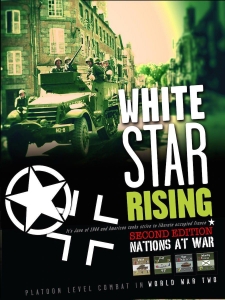 Off the Beaches and into the Fire

"May God have mercy upon my enemies because I will not."

It's the summer of 1944, and Allied forces fight to liberate occupied France from Germany. It's a titanic struggle that pits the advanced weaponry of the German Army against the airpower, artillery and ever-improving soldiers of the Allies. Welcome to Nations at War series.

We now include a new Battle Generator adding hours of play to your game.